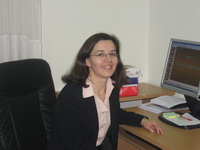 Long term member of the Croatian Association of German Teachers (www.kdv.hr). Member of the Presiding Board of the Association in the third mandate, currently in the role of the president.

Irena Horvatić Čajko is a senior lecturer in the Department of Foreign Languages. She has been working at the Faculty of Law since December 2006. She used to work as a German and English teacher at the XVIII. Grammar School in Zagreb, as English teacher at the School for Foreign Languages of the Croatian Military College in Zagreb and as interpreter of the Public Relations and  Protocol Department in the Cabinet of the Chief of Staff within the General Staff of the Croatian Armed Forces.

She gained experience of work on international projects as a coordinator of the Institute for Globalisation and Intercultural Learning - IGI. She also worked as a coordinator and editor in the publishing house Školska knjiga. She started teaching on the university level as an external collaborator at the Department of Intercultural German Studies at the Faculty of Teacher Education in 2003.

She is also occupied with translation and author's work, being the author of the concept and coauthor of the texbook series for German as the second foreign language in grammar and middle vocational schools - zweite.sprache@DEUTSCH.de 1 - 4.